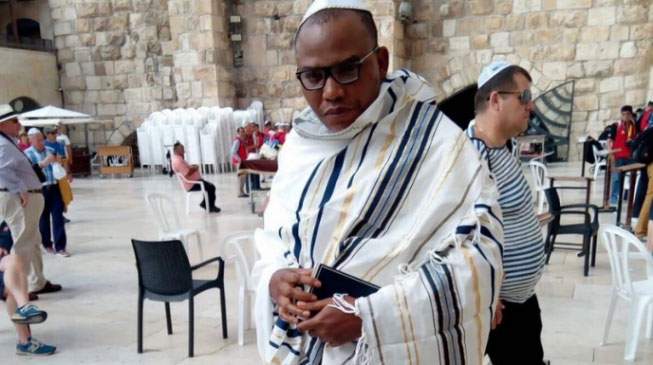 The leader of Pro-Biafra separatist group Nnamdi Kanu has said he left Nigeria because he could not get the necessary protection from the court.

Kanu, who leads the Indigenous People of Biafra (IPOB) was first seen in the public in Jerusalem on Thursday after he went underground in September 2017 following the deployment of troops to the southeastern city of Umuahia.

He is facing a sleuth of charges, most of which are connected to his call for the independence of the southeastern region of Nigeria.

“I did not jump bail, I left because the court failed to protect me,” Kanu said in a Facebook broadcast on Sunday

“What they are charging me does not exist. I don’t have any weapon. My only weapon is my microphone and my courage.”

Kanu was first arrested in October 2015 by the Nigerian government and was granted bail in April 2017.

Justice Binta Nyako ordered him not to attend any rally, grant interviews or be in a gathering of more than 10 persons.

The Judge in addition ordered that the defendant should produce three sureties with N100 million each, who should include a highly respected Jewish leader since, according to her, the defendant claimed Judaism as his religion, a senior and highly placed individual of Igbo extraction and in the ranking of a senator, while the last is expected to be a respected individual resident in Abuja with proof of ownership of landed property.

Kanu, a former real estate agent in London, was also ordered to deposit his international passport, including his British passport with the court.

He was released after meeting all the bail conditions. It is, however, unclear how he got to Israel without his travel documents and his trial has stalled due to his consistent absence from court.

Three persons that stood surety for him were dragged to court by the Nigerian government, claiming that the separatist leader violated terms of his bail.

But his lawyer said in March that the government was in a better position to tell the court about the whereabouts of his client.

“(The government) should be in a better position to explain to court where he is”.