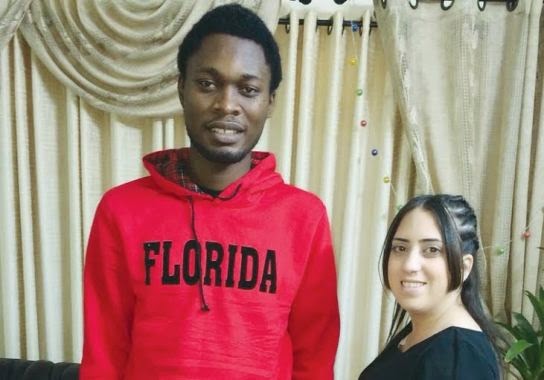 A black-hatted rabbi, a white-hatted Muslim elder and a black Christian pastor attend a Christmas celebration in a Druse village. This is not the first line of a joke, but a celebration of a gift of life.

When Smith Jadesimi, a tall and athletic 25-year old from Nigeria, first approached his country’s Israeli Embassy in Abuja about his desire to donate a kidney to an Israeli, he was politely but firmly turned away. 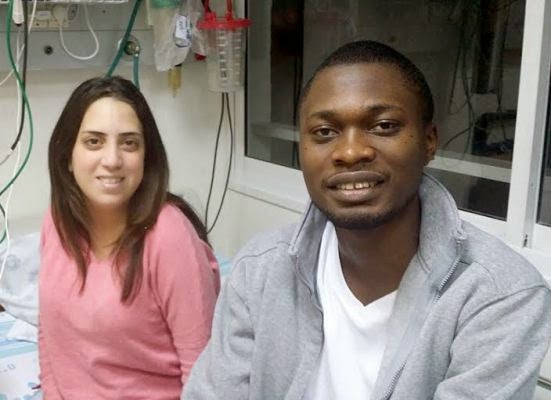 Likewise, the organization that facilitates kidney transplants in Israel told him no; at least one Israeli hospital refused him, too.

Jadesimi was undaunted. A man of deep faith, he knew he was supposed to donate a kidney to an Israeli, and that it would happen.

Rabbi Yeshayahu Heber was among those who rejected Jadesimi. Although Heber himself was a kidney recipient and the founding chairman of Matnat Chaim – Hebrew for Gift of Life, an organization that desperately seeks organ donors – he assumed Jadesimi was seeking a way into Israel as a foreign worker, like many other Africans. Said Heber, “We don’t want [those who have fallen on hard times] and want to donate their kidneys for money; we’re only seeking altruistic donations.”

Heber, a full-bodied man with a salt-and-pepper beard, has just celebrated his 50th birthday; he reached this milestone thanks of the generosity of a kidney donor. When he was in his early 40s, working as a high-ranking educator in two prominent religious academies with more than 1,000 students, he suddenly lost the ability to bound up the stairs. His kidneys had failed, and his life now centered around dialysis.

At the Jerusalem hospital where he received treatment, there was a younger kidney patient named Pinhas Turgeman, whose brother had been killed fighting in Lebanon. The two men studied Torah together through the long hours, as the dialysis machines filtered their blood. When Heber received a kidney transplant, he assured Turgeman he’d be next. But Turgeman died of a heart attack related to his disease before the rabbi could find him a donor.

Turgeman’s parents had lost their only two sons; Heber, too, was devastated. “On that day, the second day of Adar at 7:05 a.m., when I heard the news, Matnat Chaim was born,” recounted Heber. Seven years later, 186 men, women and children have received kidneys through the organization.

The first letter from Jadesimi in Nigeria arrived on September 14, 2013. Despite his initial rejection, Jadesimi kept writing. He eventually convinced Heber that he was for real. He was ready to undergo medical tests for suitability in a Nigerian hospital – and he passed them all.

“The rabbi changed his mind about me, but there was still the Israeli Embassy to convince about a visa,” recalled Jadesimi.

I met Jadesimi at a Jerusalem hostel for children who have come to Israel for heart surgery. He is volunteering there until he returns to Nigeria.

Jadesimi was born in 1987 into a large, prosperous and highly educated family, residing in the oil-rich Delta State (population four million) of Nigeria. After public school, he graduated from the University of Pretoria in South Africa and holds two master’s degrees, one in statistics and another in computer engineering.

“Our parents read the Bible with us every morning,” he says. “They stressed the value of love. You can believe in something, obey the commandments, keep the Sabbath holy, but love is the greatest motivator. If you really love, you won’t steal or covet your neighbor’s wife.”

His parents attended an Anglican church, but Jadesimi preferred a more evangelical approach and joined the Lagos branch of the Synagogue Church of All Nations, which he says has literally millions of members.

He became a lay pastor there. Staying at a friend’s home while in Lagos, he began importing fish from Scandinavia and Indonesia to give to 100 women, market fishmongers who could make a living peddling them. He gave away 70 percent of his income, not only in Nigeria, but also to those in the Philippines and Haiti, to Christians in Syria and to rebuild Gaza.

The Middle East seemed to him to be the most troubled; he googled “People who need help” and Matnat Chaim came up. He read about the kidney donation program and checked the reputedly low risk for the donor, first with a friend studying medicine and then with a veteran physician. “I told him I was trying to convince a friend not to donate his kidney and needed good arguments.”

The odds seemed favorable for a young, non-smoking, non-drinking footballer like him.

“I figured that God isn’t a fool to give us two kidneys if we only need one, so we’re supposed to give one away to the needy,” he said. “Love isn’t just in your heart, you have to do something to show you love others. And not just someone you know, not selfish, someone beyond your circle. If you have $10 billion and a kidney problem, all of your money can’t solve the problem – only a donor can.”

When Heber’s letter to the embassy didn’t open the door, the rabbi applied to the Interior Ministry on behalf of Jadesimi. Half a year passed before a tourist visa was issued; another month went by before the visa was stamped in Nigeria.

At last, he got permission to fly to Israel. The transplant would take place in Haifa. He underwent additional medical tests, examinations, a first-ever session with a psychiatrist and another with a social worker.

“After I drew pictures for the psychiatrists, a committee including professors grilled me about why I wanted to come; I explained how God had sent me.”

He had to return to Nigeria for an important business appointment in June 2014. He was assured he’d hear within three weeks.

At last, at the end of September 2014, four months later, he received word that he’d passed inspection. Was he angry at the delays? “Love means being patient and not expressing yourself in anger,” affirms Jadesimi.

Now, he had to tell his parents. How did they take it? “They didn’t like the idea, to put it mildly. They said I was unmarried and had no children, that I shouldn’t take such a risk. I spoke about the advanced medicine in Israel. They relented, figuring they’d kill my spirit if they stood in the way. We all prayed together for success.”

Two years after beginning his quest to give away a kidney to an Israeli, Jadesimi was accepted. His only stipulation about the recipient was that he or she be a young person around his age.

The recipient, he learned, would be Omaima Halabi, 21, a recently graduated law student from the Druse town of Daliat al-Carmel outside Haifa. Jadesimi had never heard of the Druse.

The surgery was arranged for December 18 at Haifa’s Rambam Medical Center.

“I wasn’t afraid; It was a mission with God on my side. I had peace of heart.”

He met Halabi, a pretty young woman with shoulder- length dark hair parted in the middle. He was amazed that he’d be able to give her another chance at a normal life. She’d already been suffering from kidney failure for a year and a half, and had a bleak future without a kidney.

Omaima’s father, educator Farah Halabi, heard about the rabbi from the Har Nof neighborhood of Jerusalem and his kidney-donating organization from the hospital staff where his daughter was being treated.

On the day of the surgery, Christian prayers were offered in Nigeria, Jewish prayers in Jerusalem, and Druse prayers in Haifa. “We were all praying for the same thing,” noted Heber.

The surgeons detached and removed Halabi’s kidney, replacing it with one of Jadesimi’s. They connected the tubes and voila… the kidney started to work.

Jadesimi says he felt pretty good after the surgery, and was eager to leave the hospital so he could observe Christmas.

Farah Halabi, Omaima’s dad, offered Jadesimi a ride to the Basilica of the Annunciation in Nazareth.

“I had to be careful of the stitches and couldn’t kneel after the surgery,” says Jadesimi. Halabi had a word with the priest. “I was given a VIP seat,” recounts Jadesimi. “Imagine, a VIP seat in Nazareth.”

Heber doesn’t allow payment or even extravagant gifts to donors, but he approved of the Halabi family’s offer to make a “Christmas” thanksgiving dinner.

They’d do it Druse-style, with grilled meat and abundant salads. The mayor of Daliat al-Carmel would be there, the Druse elders, relatives and Rabbi Heber, too.

A packaged meal from the religious kibbutz Nir Etzion was ordered for him.

“I’m so grateful – to my donor Smith Jadesimi, to my family, to Rabbi Heber,” said Omaima Halabi at the feast. “This was certainly arranged in heaven.”

No one in the room argued.

Foreign investments drop in Nigeria by 32% in one month