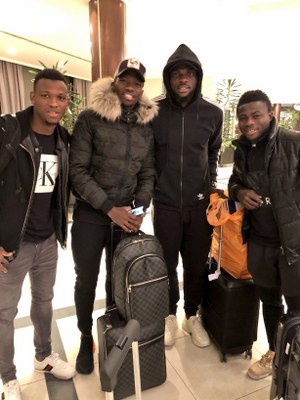 The number of Super Eagles players already in camp for Friday’s international friendly game against Poland has risen to 14 following the arrival of eight players but China-based captain John Mikel Obi and Odion Ighalo as well as Chelsea’s Victor Moses and vice captain Ogenyi Onazi are still expected to arrive.
According to the Super Eagles verified Twitter handle on Tuesday, Francis Uzoho, Elderson Echiejile, Stephen Eze, Joel Obi, Shehu Abdullahi, John Ogu, Moses Simon, Kenneth Omeruo all were the latest players who arrived the team’s Radisson Blu Hotel in Wroclaw.
They joined Troost Ekong, Alex Iwobi, Ola Aina, Tyronne Ebuehi, Brian Idowu and Leon Balogun who had arrived on Monday.
The game against Poland comes up Friday, March 23 before the team will head to London for their second friendly against Serbia on March 27.
Both friendlies are part of the Eagles’ preparation for this year’s FIFA World Cup in Russia.
The Eagles are in Group D with Argentina, Croatia and Iceland and will kick-off their campaign against Croatia on June 16th in Kaliningrad.
Source: Complete Sports