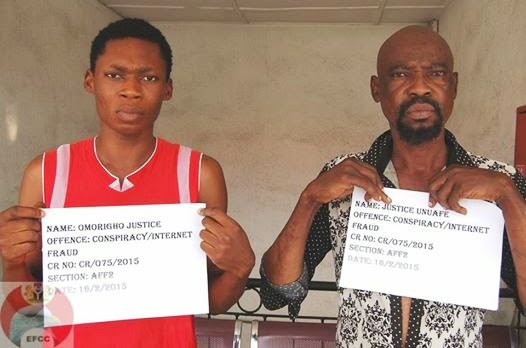 Find the EFCC press statement below…

Father and son were arrested by operatives of the EFCC upon intelligence gathered while investigating a reported case of internet scam.

The duo who are jobless, were found in possession of Honda Accord 2004 model and an Acura ZDX, without document to prove how they got the vehicles. They also have an almost completed storey building located in Delta State . The accused persons decidedly refused to give the EFCC operatives the required information needed from them for the investigation.

One of the charges reads:
“That you Justice Unuafe on or about the 12th  day of February, 2015 at Port Harcourt within the jurisdiction of this honorable court did obstruct the officers of the Economic and Financial Crimes Commission by refusing to give the details of your account number, the details of your relation who sold Acura ZDX with registration number SMK 307 DC to you and other information requested from you and thereby committed an offence contrary to and punishable under Section 38 (2) (b0 of the Economics and Financial Crimes Commission (Establishment) Act, 2004.”

Another charge reads:
“That you Omorigho Justice Unuafe on or about 30th day of December, 2014 at Port Harcourt within the jurisdiction of this honorable court with intent to defraud, did obtain the total sum of $4,256 (Four Thousand Two Hundred and Fifty Six Dollars) by false pretence from one Cheng Chung Shin by representing yourself as MARO MOTON, which you knew to be false and thereby committed an offence contrary to Section 1 (1) (a) of the Advance Fee Fraud and Other Fraud Related Offences Act, 2006 and Punishable under Section 1 (3) of the said Act.”

They pleaded not guilty when the charges were read to them.

In view of their pleas, counsel to EFCC, Sadiq Hussain, prayed the court to fix a date for trial to commence, while the accused persons be remand in EFCC custody.

The defence counsel, C. I. Anyaghbuna, however, pleaded for bail for the accused persons.

In his ruling, Justice Akanbi granted them bail in the sum of N500,000 (Five Thousand Naira) with one surety each in like sum. The sureties must have their addresses verified by the EFCC, and must be responsible members of the society.

Fashola accuses Jonathan of showcasing Lagos project as own achievement

New phones you should watchout for in 2014

Breaking! President Buhari writes Nigerian senate for extension of his 10-days vacation in london due to incomplete medical test