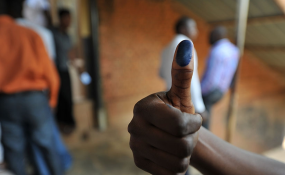 The Independent National Electoral Commission (INEC) has projected that the number of Nigerian voters may likely reach the 80 million mark before the 2019 general election.

Voting population during the 2015 general election was 70 million.

The commission also dismissed fears being expressed by some stakeholders that the security agencies could postpone the election at the last minute.

The fresh projection was made by the Chairman of INEC, Prof. Mahmood Yakubu, at the weekend during a roundtable organised by the European Union delegation to Nigeria and West Africa.

While giving an update on the Continuous Voter Registration (CVR) exercise, Yakubu said the commission has as at last week, registered 3.2 million Nigerians which when added to the existing 70 million, will now give 73.2 million voters.

Yakubu said: “We started in April and as at last week, we had registered 3.2 million (Nigerians) added to the 70 million registered voters for the 2015 general elections that we had before. Our projection is that the voter register will probably be over 80 million by 2019.”

“All the other arrangements – logistics, staff training, and security are in place. We are killing two birds with one stone. And for the first time in the history of elections in Nigeria, 37 political parties are contesting in the Anambra State election. Out of the 14 activities lined up, we have executed nine. We are so determined as a commission to make the 2019 general elections better than 2015.”

Yakubu used the opportunity of meeting to dispel fears being expressed by some stakeholders that the security agencies could postpone the election at the last minute.

He said although the responsibility of securing the environment before, during and after elections was not within the commission’s powers, it however maintained a close relationship with all security agencies through the Inter-Agency Consultative Committee on Election Security (ICCES).

The chairman said: “That is why we have also decided as a commission to issue the timetable and schedule of activities well ahead of all elections. In Anambra State, we issued the timetable in February for an the election that will take place in November. We have done the same for Ekiti and Osun States.

“We have taken care, in both cases, to avoid party politics, national festivals and students’ examinations. The last (governorship) election in Ekiti State took place on June 14. But June next year is likely to coincide with the fasting period and Salah, and since the law says we should conduct the election at least 30 days to the end of the tenure (of the incumbent), we shifted it to July when there would be no festival or examination.

Top on the agenda of the meeting were some 30 recommendations handed to INEC by the European Union Election Observation Mission (EU-EOM) after the 2015 general election, for which the EU had dispatched its Electoral Follow-Up Mission to Nigeria, led by Mr. Santiago Fisas to ascertain what had happened since then.