Nigeria’s Saheed Adepoju is a young man with big dreams. He is the inventor of the Inye, a tablet computer designed for the African market.

He believes that, because of this, there is a big market for it in Nigeria and elsewhere in Africa, particularly amongst students.

He is also hoping to sell his tablet – which runs on the Google Android operating system – to the Nigerian government and plans to have at least one computer in each local government area.

The Inye is a mobile internet device. It gives you access to the internet; it allows you to play media files and watch movies”

“The Inye is a mobile internet device. It gives you access to the internet; it allows you to play media files and watch movies. What we have is an 8-inch device, a device that is half-way between a laptop and a mobile phone,” he told the BBC’s series African Dream.

“You have the standard software applications that come pre-installed and then you have the ones that we are working with various local developers to bundle on,” he added.

Among those local apps there is one designed to raise awareness about HIV and others related to water and sanitation.

“We work with local developers that have expertise in particular areas so that we don’t end up doing so much work and we just have a collaborative way of doing things together,” he said.

Mr Adepoju has a background in software development and is a Sun-certified Java programmer. 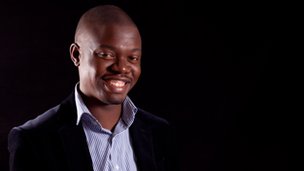 After doing a first degree in maths and computer science in Nigeria, he completed another one in advanced computing by research at Bournemouth University, in the United Kingdom.

Upon graduation in 2009, he returned to his home country and started working for a consulting firm.

“Within eight months I got fired, primarily because of differences in approach to doing business. In the middle of all this, the Apple iPad launched, back in January of 2010, which inspired us to actually look to build such [a] product within the African marketplace,” the entrepreneur told the BBC Africa’s Chris Ewokor.

He said that, with that goal in mind, he borrowed money from friends and family, raising a total of about $60,000.

According to him, all of that went on the devices and the logistics – there was no budget for marketing, so early advertising was “word of mouth” on social media.

The first 100 units of the Inye, which means One in Nigeria’s Igala language, were built in China and, after receiving feedback from its users, a second version was launched in May 2011.

Encipher Group, the company he cofounded with web developer Anibe Agamah, also offers customised IT services and products, including cloud computing, which are mostly based on open technology to keep costs down.

According to Mr Adepoju, the company and the apps it develops are focused on preserving local culture through technology and making products which are specific to the local market. 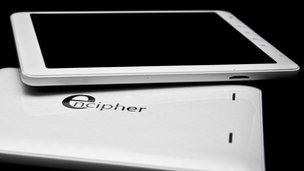 Another product that the firm has been working on is Encipher TV, a box where people can watch African television, plays and films.

However, he says that it has not been easy to raise capital in order to develop the business faster.

“Here venture capital (VC) is still in its infancy and most VC firms wound want to invest in tried and trusted companies that have gained some form of traction,” he said.

“We face the challenge of getting people to listen to the various propositions. We’ve been to a number of private investors and also to the government,” he explained.

Not surprisingly, his immediate plan is to “try and raise capital from whatever sources we can get – locally, internationally or privately – and to try and still to push the brand forward as much as we can”.

Will his tablet computer succeed in such a competitive environment? Only time will tell but Mr Adepoju and his colleagues are adamant that it will, not only in Nigeria but also in other African markets.