According to the ranking of Forbes magazine, published on December 14, the Nigerian billionaire Aliko Dangote is on the second step of the podium of the most powerful black personalities in the World.

#AlikoDangote“There are nearly 7.4 billion people on planet Earth, but there are 74 men and women who make the world go round” ~ Forbes 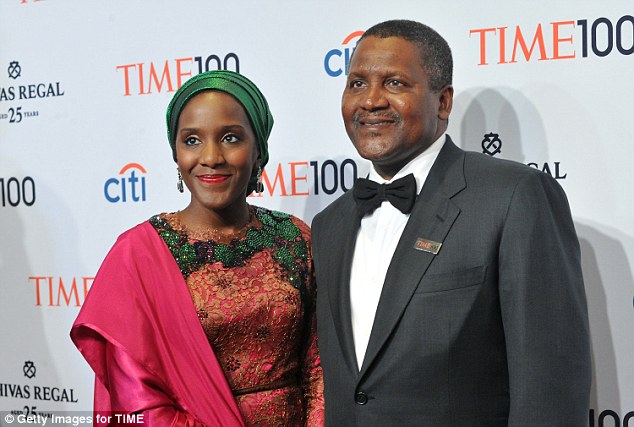 Dangote pictured with his daughter, Halima, at the TIME 100 Gala in New York

The economic magazine Forbes, founded in 1917 by Bertie Charles Forbes is renowned for its various rankings published annually. This year, Forbes attributed to Aliko Dangote the second place of the most powerful black people in the world, after Barack Obama. Indeed, the one who is considered the richest man in Africa is ranked 68th, twenty places of the current American president who ranks him in 48th place.

The CEO of Dangote Group , is a regular Forbes ranking. It has already been classified:

For the record, in 2007 Forbes said that Oprah Winfrey was the “blackest person in the world”. Aliko Dangote, then little known outside Nigeria, had publicly retorted that he was “well, much richer than Oprah Winfrey.” It will exceed the 15.3 billion euros in 2013 and its group is its shares in its listed companies amount to more than 28 billion dollars.

Aliko Dangote built his colossal fortune by founding Dangote Cement, the largest cement producer on the continent. In 2015, Dangote Cement creates new plants in Cameroon, Ethiopia, Zambia and Tanzania. The company produces more than 30 million tons per year and plans to double its capacity by 2018. Through its business, Aliko Dangote is present in 16 countries on the continent. His secret?

“To reinvest its profits in the country instead of hiding money in Swiss coffers, to lead a modest way of life and to bet on the domestic market of the most populous country in Africa”

In 2016, Aliko Dangote did not hesitate:

Aliko Dangote, criticized for his connections with the military junta from 1983 to 1999, is nonetheless a reference in terms of Afro entrepreneurship and investment on the continent. Like him we firmly believe that:

“If we Africans do not do it and set an example, no one else will come to Africa”