Zulu King Godwill Zwelithi’s utterances on March 23rd launched the Zenophobic attacks in South Africa and he had refused to apologize, even after finding out that his people have maimed, killed and destroyed businesses belonging to black foreigners. He’s still insisting that foreigners should go back to their countries but tried to save face by saying attacking the foreigners is not how to chase them away. He wants the government to do it legally.

During a speech last month, Zwelithini called for the deportation of foreign nationals living in the country, saying it was unacceptable locals were being made to compete with people from other countries for the few economic opportunities they had available. King Zwelithi said “foreigners must pack their bags and go home”. 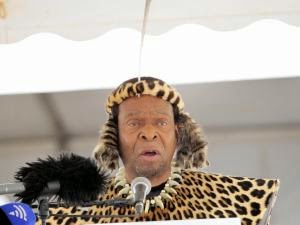 His three major complaints and why he wanted foreigners to go were; 1. SA traders in the townships said they could not compete with the prices that foreign-owned businesses were selling their products. 2; foreigners involved in crime. 3. Lack of respect shown by foreigners to locals.

Addressing Pongolo community members during a moral regeneration event, Zwelithini accused government of failing to protect locals from the “influx of foreign nationals”. He said;

“Most government leaders do not want to speak out on this  matter because they are scared  of losing votes.  As the king of the Zulu nation, I cannot tolerate a situation where we are being led by leaders with no views whatsoever.

His comments were widely condemned with the SA DA describing it “highly irresponsible’ ‘Particularly given the recent spate of xenophobic attacks in South Africa, he should do the right thing – retract and apologise,”

He didn’t and his spokesman went on record to say the King had nothing to apologize for, that he meant every word he said.

“I think the people who’re complaining are misinterpreting his speech. He didn’t say foreigners must be attacked or harassed. The king was talking about foreigners who are here illegally. Some are involved in serious crimes like drug and human trafficking. We don’t need such people in our country so the king is right.” His spokesman said

After the killing spread across different cities, the king has relented a little and is planning to speak to his people this Monday in an effort to quell the attacks. He’s expected to address the public directly and clarify his statement and ask his people to stop the violence which his words started…