“This is the man with the golden touch,” Nana Addo Dankwa Akufo-Addo excitedly told a guest in full glare of jubilant supporters and an observing press. “Anything he touches turns to gold.”

He is talking about Adebola Williams, chief executive officer of StateCraft Inc, the communication agency that helped power Ghana’s three-time presidential aspirant to a victory this time, becoming President in January.

Both elections are eerily similar. Both incumbents, as Vice-Presidents had stumbled into public office based on the deaths of their principals. Both entered into office on a wave of wild popularity. Their opponents had run at least twice each before (three in the case of Nigeria’s Muhammadu Buhari) – and both had won in the years that they brought in StateCraft Inc to manage their political communication. Both campaigns ran on a ‘Change’ message. 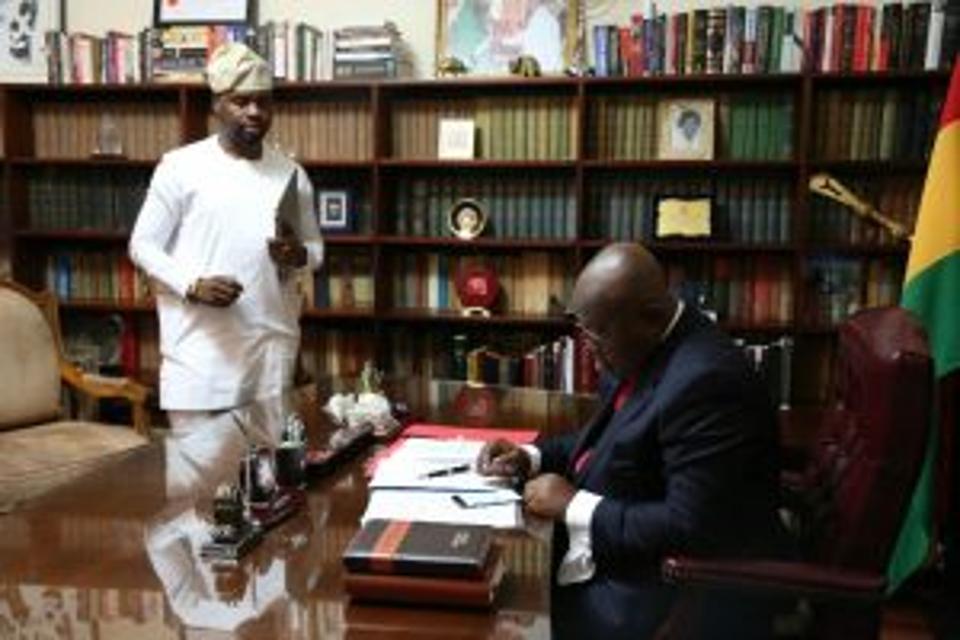 “Because the conditions were so similar, it was easy to replicate a message of ‘Change’,” Williams says during an interview. “Not every election and every context will require a message of change, even though it’s a global movement. “But many countries in West Africa and across Africa are ripe, even desperate for change.”

Williams is co-founder of RED, which is the 11-year-old parent company that houses StateCraft Inc. It’s a network of four media companies focused on Africa’s youth: Red Media Africa, a Public Relations company working in West Africa for Facebook, Uber, Union Bank and Heineken; Generation Y!, a TV and online content company with one of Nigeria’s most popular online newspapers and The Future Project, a social enterprise that hosts Africa’s biggest youth social change event, The Future Awards Africa.

His career began first in film 16 years ago and then in the media began 13 years ago, working for a youth counseling company and soon co-presenting two shows on Nigeria’s National Television Authority. He parleyed that into a thriving career as a TV producer, working for Nigeria International, a syndicated TV show in three continents; and Living it on South Africa’s Mnet.

“I returned to acting last year,” he mentions, credits including the stage play London Life, Lagos Living and what has been called Nollywood’s biggest-budget film, 93 days – capturing Nigeria’s historic response to the Ebola crisis on the continent in 2014. “Even the film projects fit into the theme of my life’s work: using the media to galvanize Africans to solve their own problems.”

Indeed, RED doesn’t fancy itself just another media company. It’s uniqueness lies not just in its combined content-communication-development, but also in its lofty ambitions of large-scale social change– using the media to galvanise young Africans to take political and economic action.

“We always say that in this century, the media can no longer be a bystander,” Williams shares, animated. “Our big audacious goal is social re-engineering. Political elite across the world have gotten too arrogant, too walled off, too uneven. It is time to hack establishments and hack these insular systems and return power to the hands of the people, where it belongs. And yes, for them to do whatever they wish with that power.”

That mission led them from building hugely popular media platforms in their native country, Nigeria to a specialization in governance communication across the continent.

“For us, building the sustainable business model is crucial. You listen to Peter Thiel or Elon Musk or Tony Elumelu and there is a growing global sense: social change must be driven by a sustainable model,” he says, recalling his role leading some of Nigeria’s most prominent youth activist campaigns. “After serial engagements focused on driving accountability and modifying government behaviour, we began to think more long term about our business and our misison: what is the sustainable business model that ensures we grow financially and build the resources we need to be effective, while at the same time driving the social change that is so central to our identity?”

The idea for the StateCraft model, interestingly, came from working for the man they first elected and then eventually defeated.

“Oronto Douglas (of blessed memory), the special assistant on strategy to President Goodluck Jonathan had asked our social enterprise to convene young leaders to chart a 20-year course for youth involvement in public service,” he recalls. “After that, our content company asked for an exclusive interview with the president. But then, after that request and a long silence, he suddenly calls us out of the blue two months later, and says they were impressed with our work and they had found out we had a PR sister-company: could we handle campaign communication targeted at the growing youth market?

“We saw in it every single thing that we were extremely passionate about: media, youth, nation building on the largest scale. And at the time, Jonathan was a change candidate like no other; what some called a breath of fresh air. He was the first minority president, he had a particular interest in the arts, had expanded the space for civil society and free expression, and was very passionate about engaging with young people.

“Unfortunately,” Williams adds with not a little hint of sadness. “He turned out to be a disappointment. However, voting him in was a crucial step foreword for Nigeria. It enabled Nigeria make huge leaps that no one can regret: he oversaw massive leaps in infrastructure; and established and strengthen a truly independent electoral commission. The latter became his most important legacy, and it is one for which he must get eternal credit.”

Williams became disenchanted, along with much of Young Nigeria, with the allegations of corruption that came to dog the government, the rise of Boko Haram, and the politics that led to government’s initial denial and slow response to the kidnap of 256 girls from the Chibok village in Borno State. They couldn’t possibly work for Jonathan’s next campaign, they decided.

“Nigeria’s politics is structurally different from America’s or what you find in much of the West,” he explains. “Nigeria’s political parties, and much of West and East Africa don’t have distinct ideologies, most in theory and all in practice. There are no big debates over economic systems or cultural wars. Parties are not fighting over abortion, over Supreme court justices, over open or closed markets. So in America, you can’t possibly go from messaging on pro-abortion to messaging on anti-abortion.

“In Nigeria, however, many of those debates are either closed here or not necessary. Voters are in agreement over government involvement, over expectations of social security, over gay marriage and abortion, over income inequality and the place of the police. So elections boil down to character and personality. And so that movement was easy, and urgent.

“Someone once asked us: ‘You want to change Africa, but what’s the business model? Grants?’ We have always been a business focused on the imperatives of community and nation building – nation-building is our business; we have made it at the centre of our media group. StateCraft Inc is our business model for building a sustainable financial structure that enables us achieve our critical mission – empowered young Africans to take charge of their countries, and their destinies.”

How come they win all these elections? Williams says the playbook is very simple, actually.

“Very simple at the base of it: we use our experience with on-the-street activism – everything we have been involved in from #EnoughisEnough to #OccupyNigeria to #BringBackOurGirls – to connect popular anger and aspiration. The dichotomy between community organizing or activism and politics has always been a false one as Obama ’08 showed. Now, at the time of our first involvement, we were just citizens getting involved, but then we realised ‘wait a minute, we can actually dedicate our lives to this personal passion’. They are one and the same. So we are taking that model of true people-power to return power to the hands of the everyday citizen.”

He points to their model in Nigeria of building an army of volunteers – tagged #GMBVolunteers, complete with a Twitter handle of almost 100,000 followers – to push their message of the campaign.

“There was the same thing in Ghana. So this victory isn’t ours really. Without angry citizens determined to make change happen, we can do nothing. The Ghanaian people did this. Your job as communication is to help the candidate connect to the popular aspiration It’s the army of volunteers, of social media warriors, the party’s machineries, his own loyalists tired of their country being mis-managed and overrun, the army of dedicated party members and believers, that won this victory; our job is simply to channel that anger, to spread it and ensure citizen action. The victory is for and by the Ghanaians.”

He notes however that it would be a mistake to assume that communication alone, even in an age of social media, is enough to win elections anywhere. 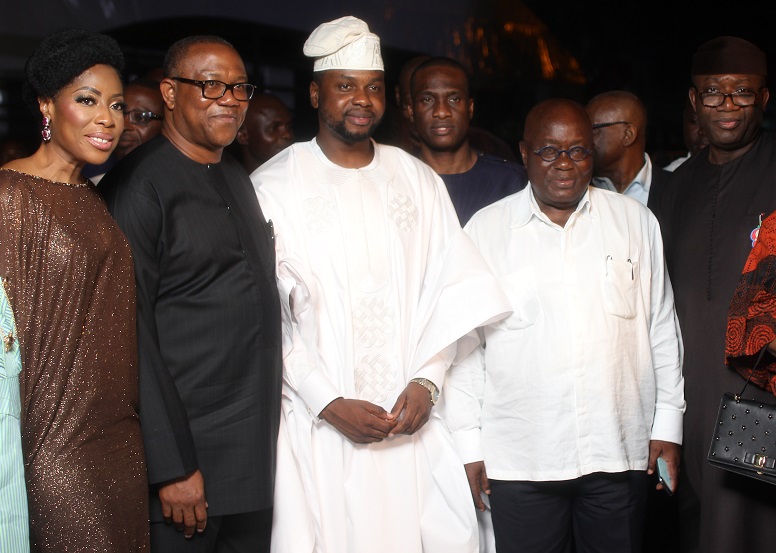 “Yes, as my co-founder (Chude Jideonwo, who is chief executive of the group) always says: at its core politics is still the art of persuasion, but you need mobilization and persuasion. Mobilisation is party/candidate structure plus data. Communication is messaging plus outreach.

“You need the David Axelrods as well as the David Plouffes, the Jared Kushners as well as the Kellyanne Conways. Oh and Kushner is of particular interest because he is first passionate about and appeared to have brought that keen sensibility into mobilization.

“How we work essentially? We survey the field and then give the candidate our advise on mobilisaion. You need X and Y alliances, you need X relationship, youu need to seal X deal, and delegitimize or neutralise Y. Then, messaging seals the deal. You always have natural voters whoever you are. Mobilisation helps secure those, but messaging helps rally them, set fire to their passion and helps convince those that you need to go beyond your floor.”

They are already working towards their next project, even though they will not, for reasons of confidentiality reveal who the client is, except that it is another presidential election within Africa.

“Democracy will continue to flourish in West Africa and the whole of Africa because the rules have changed,” he says. “The old guard has plenty of experience in snatching ballot boxes, bribing electoral officials and intimidating opponents. When the system changes towards free and fair elections however, they are left out in the cold. They have nothing. And then we have the advantage.”

Beyond the next elections, he adds, StateCraft Inc and it’s parents group is focused on the initial 20-year vision it announced at RED’s first press conference in 2005, when he was only 19.”

African governments have clearly been put on notice.

Quote of the day!

Meet the 18 brilliant Nigerians working with Mark Zuckerberg at Facebook

The Ronaldo vs Messi Debate……..How necessary is it?

I’m the next president of Nigeria – Ayo Fayose

Men’s Health: The Bad Habit That Can Cause Persistent Back Pain