If you still don’t know who Nasir Yammama is, it’s our pleasure to share his story with you. He is one of those people you come across and you are just blown away.

Nasir’s ability to focus his intellect and wisdom on so many things and excel at all is beyond ordinary. Read more about him and his projects below:

Nasir is an alumnus of Informatics Academy of Information Technology. He hails from Malumfashi, in Katsina state. He attended Government Secondary School, Minna, Niger state, from where he won many IT competitions across the globe. In his teens, he won Digital Peers International’s ‘Digitest’, a youth competition aimed at showcasing digital excellence among youth (Abuja, Singapore and Dubai). He also represented Nigeria and won first place in interdisciplinary category in Mtnadao Afrika, an IT youth camp and contest for all African nations in Cairo, Egypt.

He is an IT specialist with a difference. A graduate of Information technology and Business information Systems. Apart from programming, graphics design and animation, he is into creative technology through which he engages in robotics, mobile, wearable and immersive technologies as well as haptics and interactive design. He recently designed a smart TV based Reminiscence Therapy application and installation to help people with Short Term Memory Loss for the Museum of Domestic Art (MoDA), London. (http://www.moda.mdx.ac.uk/home)

Nasir currently lives in London, where he studies Msc. in Creative Technology at Middlesex University. He is also the Lead IT and Creative officer for Greenshield of Nations (GSN), an award winning multinational NGO focused on renewable energy, environmental protection and rural development with offices in both England and Nigeria. 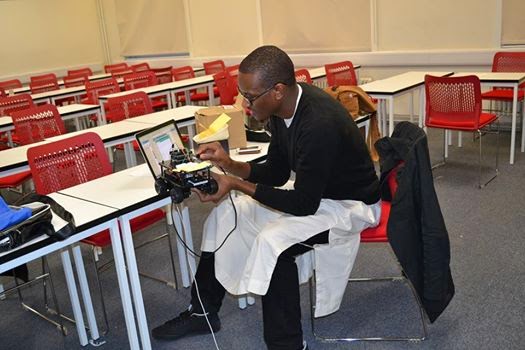 Nasir recently developed an agronomy mobile app with which he is competing in Imagine Cup, an annual competition sponsored and hosted by Microsoft Corp which brings together young technologists worldwide to help resolve some of the world’s toughest challenges. With 358,000 competitors representing 183 countries and regions, Imagine cup is dubbed as the Olympics of Technology. Microsoft will host world wide finalists of the competition in Seattle, USA, July 2014 (www.imaginecup.com). The features of Nasir’s app include:

Crop: The app helps farmers find seed varieties with traits that are adapted to their soil type and maturity zone. It also offers a custom seed guide tailored to their specific geography and crops.

Maturity: The app measures the maturity of a crop by viewing current and past growing degree days’ data for a specific farm’s location.

Harvest and beyond: Using the app, farmers can record full history of crops from when they are sown through to harvest; record chemical and fertilizer use, including type, rate, and date applied; and keep track of machinery maintenance. The app then offers access to nearby agro-industries, news, quotes, prices, markets information and tips.

At the university, Nasir is engaged in numerous projects in Creative technology including a set of wearable technology suspenders that measure heart and respiratory rate and transmit a haemostasis report to a smart phone and a Tangible User Interface makeover of the text based adventure game Zork. On one occasion Nasir was welcomed to a creative tech lab in the university’s multi-million pound Grove Creative hub and told to ‘Play and invent the future in one day‘. He innovated a new way of interaction that completely removes buttons and keys of a computer and enabled you to interact with digital objects by touching the physical ones. He tried it on his class mates; it was next to magic. See it below:

Apart from Information technologies, Nasir is also a creative writer. He is an avid writer of both prose and poetry. In 2012, he was selected among ‘22 Outstanding African Writers‘ to participate in Chimamanda Ngozi Adichie‘s Farafina Creative Writing workshop in Lagos. He writes, with outstanding brilliance in literary genres that set him apart: Science fiction, fantasy and historical fiction. Recently, his two historical fiction stories were among the most-read list on Jottify for days (http://jottify.com/works/the-mad-nomad/ and http://jottify.com/works/prey/ ). Also, this year he will start running a column on Creative Technology and Technopreneurship in one of Nigeria’s major newspapers.

Mr. Yammama on July 1 2014 had a mentoring session with renowned entrepreneur and chairman of Virgin Group, Billionaire Sir Richard Branson, as part of the reward foremerging first place winner in the British Council’s Enterprise Challenge competition.

He won the competition, out of over 2,000 contestants, with his invention of a farming support application that can help farmers with information about weather and how to take care of their farmlands.

Nasir is interested in books, renewable energies, agriculture and art. His hobbies include horse riding, travelling, and photography. In his free time, he takes classes in Arabic calligraphy and rides at dressage and show jumping sessions in London.

"The Supreme Price", An award-winning documentary shows how important women are to Nigeria

Anthony Joshua is the biggest name in boxing – everybody wants to watch him, says Mike Tyson