An import-dependent nation like Nigeria, will never grow. It was, therefore, a welcome development when the CBN said it will stop forex sales to importers of certain products. Nigeria imports  virtually everything – tomato purée, toothpick, pencils, potato chips etc.

The solution to a problem lies within the problem, says a Chinese proverb, and so some students of the Department of Mechanical Engineering under the supervision of Dr. Solomon Nwaigbo, coordinator of Chisco Institute of Transportation Studies, Nnamdi Azikiwe University, Awka, decided to look inwards. They came up with some interesting products that Nigeria can export to the world. He spoke to Vanguard Learning in his office. We designed and fabricated an aerodynamically stable mini version formula one car. The car represents what an effective racing car would look like. The design concept was adopted from that of a fish due to its streamline nature. We used a Kawasaki power bike engine. The car takes off and stops as manipulated by the driver.

Generally, automotive technologies are applicable in so many areas of life. When people hear of automotive engineering and automotive systems, they think only of cars, but when you look at the rail system, ocean liners, fishing trolleys, even the generator in your house, you see that they are powered by an automotive plant. A car is just an automobile.

So in UNIZIK, students at the first level of engineering are made to have a hands-on learning and a feel of what automotive engineering is all about. 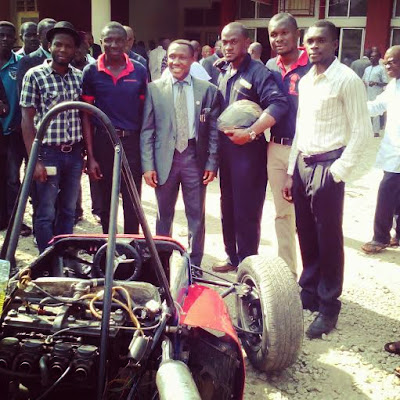 The racing car is flexible so the design concept can be adapted, developed further and used for the production of private and commercial vehicles.   The idea is not actually to make a racing car for racing purposes, no; but to bring the knowledge that it is possible to make automobiles to the level that could serve the elementary needs.

There are a lot of ongoing researches in that area now in the university. Other people are looking into shuttle bus, power bikes, tricycles etc. So such design can spur good engineering inputs and somehow, we will be part of the global automobile producers.

We have produced welding electrodes and now waiting for manufacturers to key in and produce. Over time, Nigeria has been importing flux from  Switzerland but when China came up with a cheaper brand, we diverted to China. By 1998, most of the industries had folded up because they could no longer afford the flux, produce in Nigeria and compete with the Chinese so we started importing the finished product from China.

We came up with the first locally made electrode in 1999.  Currently, we have an improved version which will compete favourably with imported ones even in terms of price because the flux is made from agro waste, solid minerals etc. The constituents of the welding electrode flux can be generated from wastes. We have abundant solid minerals in Jos; the problem is making out time and money to give it a good try.

Similar to that, we have also produced a wire drawing flux for manufacturers that draw wires. An example of what wire drawing is: In the production of nails, the wires come in very large diameters and you need to reduce them to smaller diameters to have the different sizes of nails like six, five, two and and half inch nails; the diameters vary.

The drawing of the wire is a very sensitive one and if you don’t have the flux (also called the lubricant), the wire will be cutting while the operation is going on. Even in wire production, there are different gauges of wires; they come in different diameters, some very tiny, sensitive, flexible wires. You need this wire drawing flux to make sure you don’t have them disjointed or cut off until you complete the coil.

We have gotten to the point of testing and we have done the preliminary test, what we need now is funding to get a large quantity, enough volume that will run a whole lot of coils so that we see how continuous (sustainable) it will be and  see how it will degrade overtime.

We made and presented the first pencil in the last three, four years. The pencil lead was made here. The lead was locally sourced. It is not real lead but it looks like lead. That is what the whole world will call it but actually, there is no lead in it. Normally, children bite the pencil and eat it. We incorporated some natural fibre, some carbon and added some solid minerals and baked it enough at high temperature manually because there is a clay constituent and it turned to lead. It can write.

One of the good properties of a pencil is that it must be erasable, we carried out all the tests and it was graded according to the international grading of shading. The pencil was classified. You could get a good 2B and 2H pencils after the manufacture.