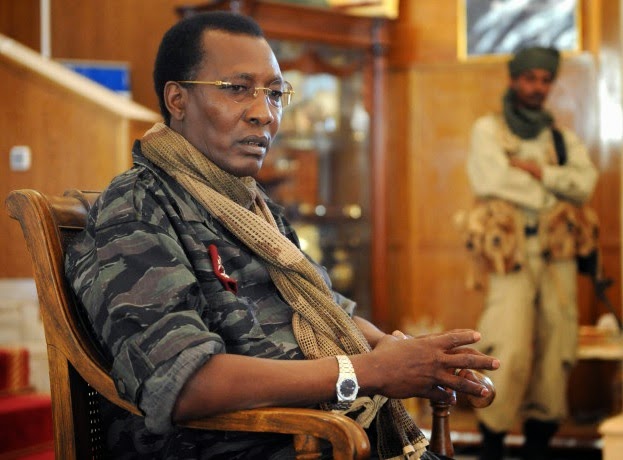 That there is a vacuum in Nigeria’s leadership is not in dispute; however the recent declaration by the president of Chad, Idriss Deby compounds Nigeria’s delicate situation and threatens the nation’s sovereign integrity. As reported by the AFP in an article of January 17, 2015, captioned “Thousands see off Chadian troops to fight Boko Haram,” Idriss Deby the authoritarian leader of Chad, Nigeria’s north eastern neighbor, said “in a speech read by the speaker of parliament that the new deployment (of Chadian troops to Cameroon) aimed to recapture Baga.” Cameroon had requested for and welcomed the deployment that saw 400 Chadian military vehicles arrive in Cameroon. [AFP] However Nigeria was not invited to the table.

In as much as Baga at the border with Chad and another 14 to 20 local governments in Nigeria by all means needs various degrees of military liberation from Boko Haram’s control, a Chadian intervention without approval by the African union or explicit approval by Nigeria’s government, even though lacking and inebriated infringes on the laws of national sovereignty; and prompts further suspicion of the intentions of Nigeria’s neighbors who have reportedly been permissive and in some cases frankly supportive of Boko Haram [See CNN]. The Chadian government and the government of Niger pulled out their troops from the multi-national force stationed at Nigeria’s northeastern border late last year leading up to and enabling the Boko Haram massacre that resulted in 2500 to 3000 dead.

The stationing of troops by Nigeria, Cameroon, Chad and Niger by November 1 of 2014 was agreed upon by the four nations at the Paris summit in May of last year. Acknowledging a vacancy of leadership in Abuja, Nigeria’s capital of government; the new do-it-our-way, without Nigeria’s or any other openly known regional or global union’s explicit authorization challenges years-long developed modalities of territorial interrelation. Boko Haram terrorists are known to organize, train and source weapons from Chad, Niger and Cameroon. Nigeria has over the past years demanded these nations seal their borders and disallow terrorist’s assemblies on their soil. The McCain approach of total disregard to “some guy called Goodluck Jonathan,” disregards Nigerians as a whole and compounds an already highly suspicious situation and pits Nigerians to choose between Boko Haram (mostly) foreign terrorists’ invasion and foreign leaderships’ invasion. Nigerians in the affected territories swear that Chad president, Idriss Deby is a sponsor and financier of Boko Haram. A majority of Boko Haram insurgents are Chadians [SaharaReporters, Jan 14, 2015]. There is undeniably a serious problem here. In the course of Nigeria’s French neighbors partnering and protecting their interests, this cannot be done with permission of terror to Nigeria and at any risk to Nigeria’s territorial integrity. [See: “Serious Allegations of Cameroon, Chad Arming Boko Haram Is Act of Terror And War;” ENDS.ng Oct 14, 2014]

In October last year, Nigeria’s president and the president of Chad jointly declared a very suspicious cessation of fire against Boko Haram [Which ENDS promptly rejected on behalf of Nigerians]. This leadership ‘blunder’ which world unions and lead groups were slow to recognize led to the strengthening of Boko Haram and the deaths of thousands more innocent Nigerians and Cameroonians. The world cannot continue to sit and watch these deadly conspiracies and administrative ‘errors.’

John Dramani Mahama, of Ghana, head of the regional Economic Community of West African States, ECOWAS on Friday called for an African action against the Boko Haram regional threat. Absent a change of Nigeria’s incapacitated government, this is the right action, long overdue. On behalf of the people of Nigeria, we demand Nigeria, Chad and Cameroon sit down and negotiate the full modalities of any incursion by Chad and/or Cameroonian forces into Nigeria’s territory, and that the urgent agreements reached as sanctioned exigently by the African union.

Opinion: APC Says Buhari has Done in 1 Month What Jonathan Couldn’t Do in 5 Years

Linda Ikeji Humble Zlatan After They Clash On Instagram