Home > People > I love my job, I can sleep in the garage — Lady Mechanic
People

I love my job, I can sleep in the garage — Lady Mechanic

How did you discover automobiles?

None of my relatives is a mechanic. It all started through dreams, at the age of 13. I saw Jesus Christ teaching me how to fix cars in a series of dreams that lasted seven nights. So, I started troubling my father to take me to a garage where he fixed his car. But he said no. My mum said never, that I wanted to bring disgrace to the family.

What path did your parents want you to follow?

Back then, I was only a little girl in secondary school. I don’t think they had something they wanted me to do then. But my dad was a farmer. He was the Vice President of the then-Bendel State Farmers Council at the time, so he was doing a lot of charity work with the farmers. I remember before that age (13), I would go to a lot of small streams with my brother, where I would use copper wires to build cars and then cut up rubber slippers to form tyres. I would then attach the tyres to the car along with a rope, which I used to pull the car. I started doing that before I had the dreams.

Did your brother influence your career path?

Not really, I am from a polygamous home. My dad got married to seven wives with 24 children. We are 11 girls and 13 boys. I think what influenced me most was the dreams; God ordained that “Sandra, this is what you will do for the rest of my life.” My parents did not agree to take me to a workshop. So, I stopped eating. I was always quoting God to them that He said they should take me. They in turn would tell me, “Where did you see God that told you?” When he travelled to the United States and Manchester, England, he came back and said he saw female aeronautic engineers. When I heard that, I said, “Oh my goodness! Daddy, I don’t want any gift from you. Take me to a workshop.” That was when he agreed. That was three to five months after I had the dreams. My mother was an obstacle.

How did you feel when your father finally allowed you to train?

I was more than excited.

Did you get teased a lot when you started your training?

Sure. The first day I got to the garage, I was working like a robot. My teachers would tell me, “Go to the toolbox, you will see (spanner size) 10/11.” I would dash back and forth looking for people to tell me to go and bring tools. When I gave them the tools, my hands would get oily and I would rub my hands on my clothes. But what struck me was that the first day I got to the workshop, I saw one big engine dismantled with dark engine oil running down. I immediately fell in love with that black oil. That was the beginning of what I wanted to become.

The news had gone round the neighbourhood: “There is one girl at that workshop. She’s learning how to fix cars.” All the kids and neighbours were waiting outside the garage gate. When I left home that day, they were in front of me, laughing at me. In humiliation, I was running and crying. When I got home, my mum said, “Serves you right.” But my father said, “Let them laugh at you today, but tomorrow, they will not laugh at you.” That gave me more courage to pursue my dream. How long did your training last?

I started going to the garage in 1983. I was at the local garage in the old Bendel State for six years. That was when we had a lot of Peugeot 404s and 305s. Those were cars whose parts — the tie rods, ball joints, steering wheel, shock absorbers — one would have to replace and refit. But that is not the case these days.

How did you cope with being the only female in your workshop?

I started it. It was a taboo then. Interestingly, when the other men saw my enthusiasm, they started encouraging me. They loved me for it. I was like their little sister. Then, I could walk to the workshop barefoot. We didn’t know much about safety in the garage at the time. It was about five minutes from my school.

You trained at the workshop even as a secondary school pupil?

Yes. Then, in the ’80s, Nigerian secondary schools had morning and afternoon sessions. I would get to school at 8 am and leave at 2 am. My overall was already in my school bag. From school, I would dash to the garage and work till 6 or 7 pm. I would then walk back home and help my home with housework, do my homework, cook, wash dishes and the like. I still did all those things. For her to discourage me from going to the shop (the following day), she would give me more chores. But I would finish them that night. I worked at the garage on Saturdays as well. 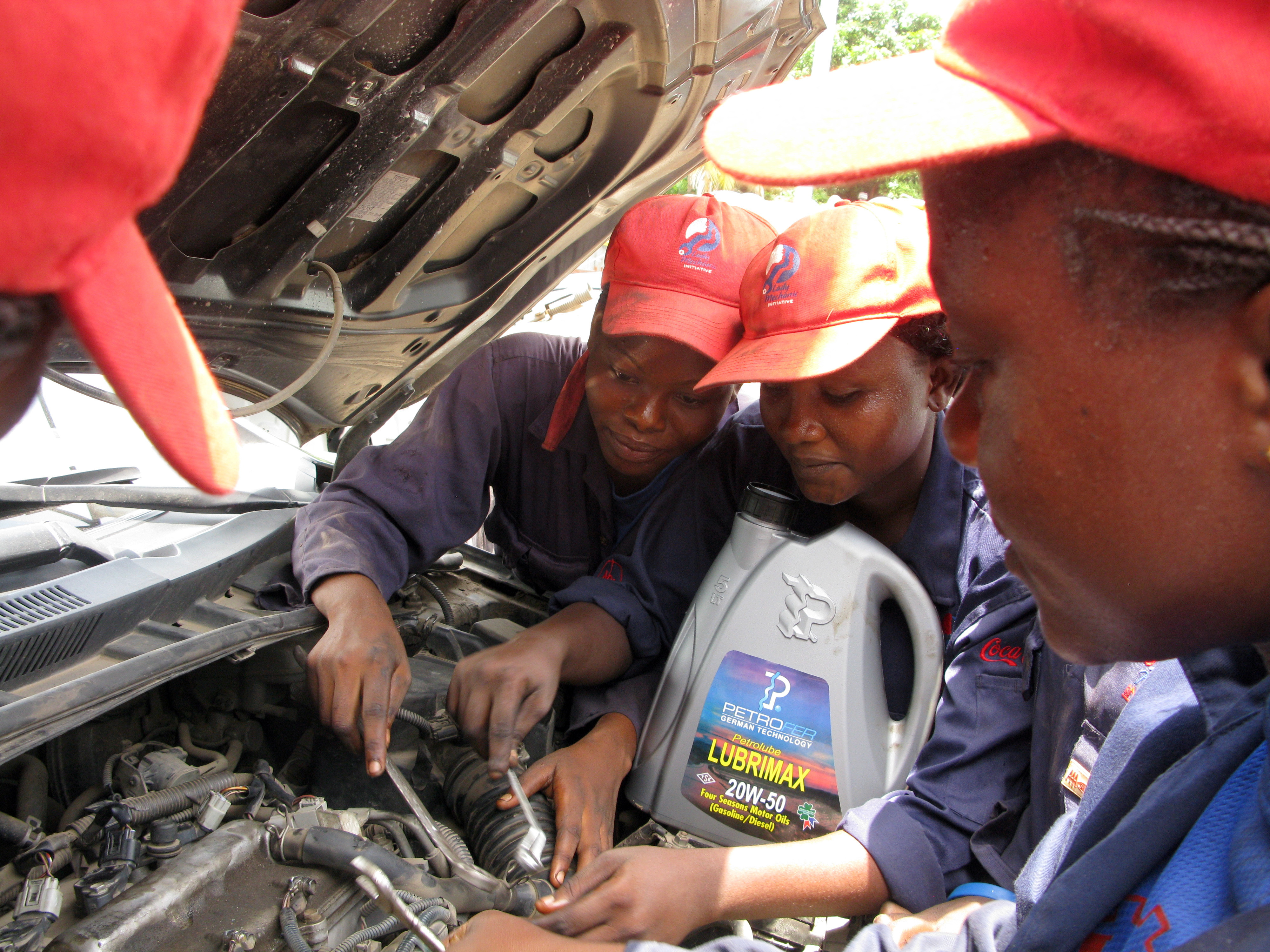 How has the journey been since then?

After I completed secondary school, I was still in the garage; I spent six years in the garage. I then proceeded to Benin Technical College to take a vocational course in automobiles. From there, I proceeded to Auchi and eventually got an employment with Bendel Transport Service, Benin City (Edo State) in the garage where I worked on their fleets, including 504 station wagons. The transportation company’s vehicles would go to northern Nigeria and the East.

When they returned, they would call me, “Sandra, we have problems with our brakes. Can you help us fix it?” They would often buy me one thing or the other, like drinks or snacks. When I checked their vehicles, I fixed the problems. I soon began to notice that they would travel for long distances and come back without faults. I then realised that I could do more than I was doing. I worked with them for two years and got another job with the Nigerian Railway Corporation in Ebute Meta, Lagos State. That was in 1991.

How did you decide to start your own workshop?

In the early ’90s, soon after I started working at the NRC, they began to have issues with non-payment of salaries. I was praying and thinking about whether to move on to greener pastures to work with any car company abroad. I knew I had the competence and every other thing to work anywhere. So, I got my first visa to Switzerland. When I got the visa, I wasn’t planning to look for money to buy ticket. Back then, the ticket was sold for N9,000. As I tried to raise the money, God would again appear to me and say, “Sandra, get a set of spanners and go to a virgin land to start your workshop.” And then I woke up.

It was around that time my uncle who brought me to Lagos was made Minister of Labour and Productivity, Dr. (Samuel) Ogbemudia. The (ministry) was on the seventh floor of the Federal Secretariat in Ikoyi, Lagos. Anytime I went visiting, I would go to the balcony and see this virgin land. That was Abacha Estate, now Second Avenue Estate. I was the first occupant at Abacha Estate. There was not a single soul there then. I moved into the mini forest and started to clear a portion to park a vehicle. While clearing, reptiles and all kinds of creatures came towards my leg and I would run away. It took me almost a month to clear a portion for one car. When I eventually cleared that portion, I had a garage. How did you get the funds to start?

I had to go to my father in Benin City. I was proud to tell my father I had a workshop in Lagos. He asked me how much I wanted and I said N800. He gave me the money and I returned to Lagos. I made an iron box, bought a set of spanners, screwdrivers, pliers, and the other tools that I needed. I started it all that with N800. That was between 1995 and 1996.

What is the most ridiculous comment you have heard about your career choice?

I have heard a lot. In 2000, after I was featured on CNN, people started looking for me. When some of them came to the shop, they said, “Please! What can a woman do?” I told them, “It is not about gender. Bring your car, I will fix it for you.” Then they said, “Woman na kitchen now. Which one you dey do for here?” I replied, “No, don’t say that. Women don’t belong to the kitchen.” In fact, that gave me a thick skin. There are a lot of women who have potentials; they are confident. Women just need to be mentored and counselled for them to have more drive to move themselves forward. So, I had to prove it; I had to work 10 times harder than male mechanics. It wasn’t a bed of roses. That was why I started Lady Mechanic Initiative in 2004 to start empowering women mechanics. I started with the proceeds I got from my workshop. When customers paid me labour charge, I gathered it and at the end of the month, I would give these girls N5,000 each. I trained them for three years in partnership with Peugeot Automobile Nigeria, Kaduna. I rented a hostel and paid with my money.

What is the most inspiring grass-to-grace story among your trainees?

The greatest grass-to-grace story is of the girls who I recruit from Kuramo (Beach), Lagos. It is a wonderful thing. When I see them today, I remember how we took them out of the brothels. Now, they no longer engage in social vices — selling their bodies in exchange for men’s money. They have gone from being victims of trafficking to female mechanics. They now have their dignity and independence. We work with the vulnerable, school dropouts, married women who want to acquire the skills, youth corps members who are only knowledgeable about theory, etc. They use any of our modules ranging from three months through six months and one year. The most important thing is that our training is for free. In fact, we pay them N10,000 monthly to learn because know they don’t have money and we don’t want them to fall back on those social vices.

Can you distinguish between Lady Mechanic at the workshop and at home?

I love fashion and I like to look beautiful. But I also love my job — I can sleep in the garage. I love my family. I love my over 1,000 girls (trainees) in five states (Kano, Kaduna, Abuja, Edo and Lagos); we are one big family. When they come to me, I become like a mother. We talk about others things beyond just the skills. We also do self-help programmes.

Leadership: Why Nobody Takes Nigerian Youths Seriously - By Ohimai Amaize

Polytechnic in Nigeria produces its first prototype of a drone