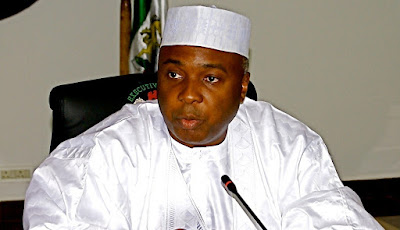 Senate President, Dr. Abubakar Bukola Saraki has advocated the need to prioritize deterrence rather than punishment in order to permanently win the ongoing war against corruption. In a statement signed by Sanni Onogu, Chief Press Secretary to the Senate President,Saraki gave the charge in his speech at the Public Presentation and Book-Signing ceremony of Senator Dino Melaye’s book titled: “Antidotes For Corruption – The Nigerian Story”, held in Abuja on Monday, according to a statement by his Chief Press Secretary, Sanni Onogu. On why deterrence is a better approach to fighting the corruption scourge, Saraki said:

“I am convinced that we must return to that very basic medical axiom that prevention is better than cure.

“Perhaps, the reason our fight against corruption has met with rather limited success is that we appeared to have favoured punishment over deterrence.

“We must review our approaches in favour of building systems that make it a lot more difficult to carry out corrupt acts or to find a safe haven for corruption proceeds within our borders.

“In doing this, we must continue to strengthen accountability, significantly limit discretion in public spending, and promote greater openness,” he said.

Besides, on that the 8th National Assembly is doing to fight corruption, the Senate President said:

“We in the National Assembly last week took the first major step in this direction towards greater openness.

“For the first time in our political history, the budget of the National Assembly changed from a one-line item to a 34-page document that shows details of how we plan to utilize the public funds that we appropriate to ourselves.”

He stated that tremendous progress in the fight against corruption under President Muhammadu Buhari in the last two years, saying,

“one area I believe we have made remarkable progress in the past two years of the President Buhari-led administration is that corruption has been forced back to the top of our national political agenda.

“Every single day, you read the newspapers, you listen to the radio, you go on the internet, you watch the television, the people are talking about it. The people are demanding more openness, more accountability and more convictions.

“Those of us in government are also responding, joining the conversation and accepting that the basis of our legitimacy as government is our manifest accountability to the people,” he said.

On anti-corruption legislation being considered by the Senate, he said, “At the moment, we are considering for passage into law the following bills: The Whistleblower Protection Bill, which I am confident will be passed not later than July 2017; The Proceeds of Crime Bill; The Special Anti-Corruption Court, which would be done through constitutional amendment and; The Mutual Assistance in Criminal Matters Bill.”
He stated that it has become imperative for governments at all levels to demonstrate that they are not in office for the pursuit of private gain, “but to make our people happier by helping them to meet their legitimate aspirations and achieve a higher quality of life…Nigeria and Nigerians have not accepted corruption as normal; we recognize it as a problem; that we are determined to make a break with our past and live by different rules.”
He stated that providing more opportunities for Nigerians will help in winning the crusade against graft and added that, “If we are able to build a quality public education system, especially at the basic and secondary level, which would not require parent to pay through their nose for their children’s education.

He further stressed the need the need to simplify the nation’s bureaucracy and administrative procedures “because it is in the complexity and red-tapes that corrupt officials profit.”