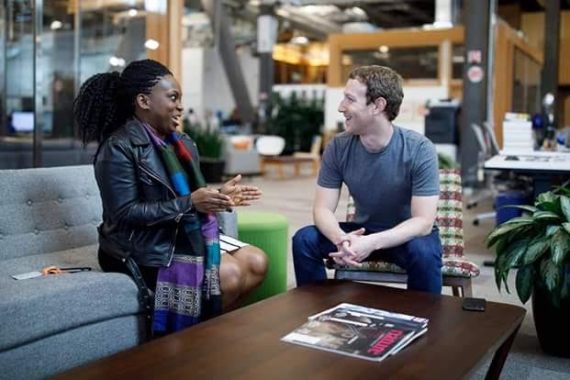 Facebook founder, Mark Zuckerberg received Lola Omolola, Chicago-based Nigerian founder of Facebook group, Females In Nigeria (FIN) at Facebook Headquarters on Tuesday, June 6th.
Taking to his page, Zuckerberg wrote that he will be meeting with Omolola and some administrators of top Facebook groups in Chicago later this month for the first ever Facebook Communities Summit.
His full post below:
“I’m heading to Chicago later this month for our first ever Facebook Communities Summit with a few hundred of our top Facebook group admins.
For the past decade, Facebook has been focused on making the world more open and connected — and we’re always going to keep doing that. But now it’s clear we have to do more. We also need to bring people closer together and build common understanding. One of the best ways to do that is by helping people build community, both in the physical world and online.
I’ve written and talked about these themes throughout this year — especially in my community letter in February and at Harvard Commencement last month. This summit will be the next chapter and we’ll discuss more of what we’re building to empower community leaders to bring the world closer together.
Over the past few weeks I’ve been meeting group admins across the country who are building meaningful communities on Facebook and will be at the summit.
This photo is with Lola, who lives in Chicago and is originally from Nigeria.
Two years ago, she founded a secret Facebook group called Female IN, or FIN. It’s a no-judgment space where more than a million women come to talk about everything from marriage and sex to health issues and work problems — and it’s helping end the culture of silence that exists for women in some parts of the world.

I’m looking forward to meeting more admins like Lola and talking about how we can help them do even more to build community. I’ll share more info on the summit as we get closer, and I’ll stream the event live from my profile later this month

If we don't do anything now, Nigeria may collapse soon - Peter Obi

"About 2.1 million Nigerians lost their jobs in 2016" National Bureau of Statistics