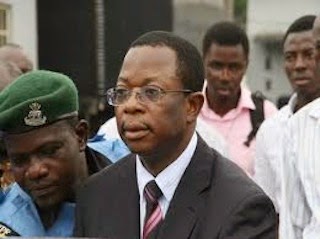 According to a report by PM News, a Court of Appeal sitting in Lagos has quashed the 22-count charge brought against the former Managing Director of Intercontinental Bank Plc, Dr. Erastus Akingbola by the Economic and Financial Crimes Commission (EFCC). The EFCC had alleged that Akingbola stole N47.5 billion belonging to the bank. The report below…

Justice Augie said it amounted to miscarriage of justice for the lower court to have dismissed Akingbola’s application challenging its jurisdiction on the matter.

“The appeal is meritorious and allowed,” she declared.
“I am convinced that the lower court refused to align itself with the decision of this court in Nwosu’s case,” she further held.
Akingbola and his co-defendant, Bayo Dada, had filed two separate applications challenging the jurisdiction of the court to hear the 22-count charge filed against them by the EFCC.
But, the lower court, in its ruling on 2 May, 2014 dismissed their applications.
Justice Lawal-Akapo had then held that the charges preferred against the defendants were within its competence and jurisdiction to determine.
Dissatisfied with the ruling of the high court, Akingbola and Dada approached the Appeal Court, praying that the trial court’s decision be set aside.
Delievering the judgement, Justice Augie declared that the lower court fell into serious error by not abiding by the decision on Nwosu’s case adding, “it is most unfair and is an injustice”.
According to her, the lower court has no option than to follow the decision of the higher court on Nwosu’s case.
“The point must be made that the decision of this court in Nwosu’s case was based on proof of evidence.”
The judge noted that all the charges against the defendants arose out of capital market transactions.
“Only federal high court is conferred with the exclusive jurisdiction to try cases of capital market transaction,” she stressed.
The appellate court held that the lower court owes it a duty to compare and contrast the documents cited by parties.
“It is its duty to examine materials brought before him. It is the role of the judge to do justice in adjudicating all the cases brought before him.
“One sided justice would amount to injustice and favouring one side.
“The proof of evidence was there but the trial judge at the lower court accused the defendants of not furnishing him with the documents.
“He has failed in his duty.”
Justice Augie further held that the appeal filed by the defendants has nothing to do with evidence, noting that the lower court failed to go through argument canvassed before it assumed jurisdiction on the matter.
She emphasised that the issue of jurisdiction should not have been toyed with by the lower court.
“I agree with the appellant that the lower court ought to have gone through the proof of evidence.
“There is no way a charge of stealing can stand without going through the proof of evidence,” she declared.
Culled from PM News

Queen of England honours Nigerians in her Honours List of 2015

SHOTS FIRED! You Need To Read What Patience Jonathan Said About General Buhari