Africa’s richest man, Aliko Dangote paid a courtesy visit to the Governor of Lagos state, Akinwunmi Ambode earlier this week where he revealed that his company is in the process of building a Gas Pipeline from Bonny to under the sea which when done, will provide Lagos with 24hr power supply.

Speaking to the press, Dangote said “I’ve assured him that we really love doing business here, it’s a friendly state for doing business and also to assure him of all the projects that we are doing that we are on course; that is building the largest ever single refinery of 650,000 barrels per day, which is by far more than the consumption of Nigeria and that would satisfy our consumption at least for the next 7 to 10 years by the time we finish.

Also, we are building the largest fertilizer plant of two to three million tonnes of Uranium and Amonia also in the Lekki Free Trade Zone and assure him that we are going to do a Gas Pipeline from Bonny to under the sea, in which when we finish, Lagos state will never ever experience blackout, there would be electricity 24 hours a day. 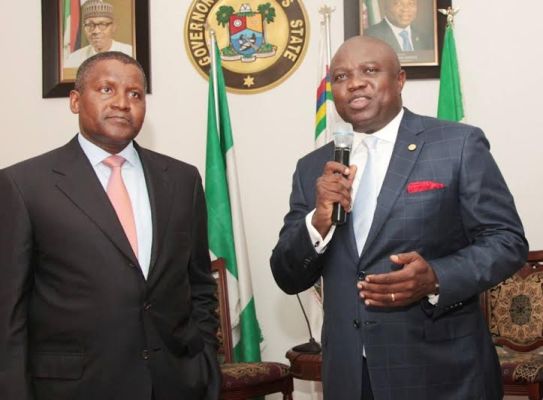 There are quite a lot of things that would come along with, that would create so many jobs. I think Lagos will be one of the fastest growing cities in Nigeria and Africa as a whole. I can assure you that we would do our own bit in terms of your efforts in policing Lagos, for security and whatever the need is, feel free to call us, we would partner with you and whatever you want us to do to make Lagos a better place. It’s not a small project. We would have challenge in getting people to work there, because at the height of it, we would have almost close to 38,000 people working at the same location, this is something that we have to partner with the state government. Having 38,000 people on one site, not every one of them will be from the community, others will be from other states, there would be cultural issues and all that, we need to integrate everybody to ensure that the whole thing work out fine,” he said.